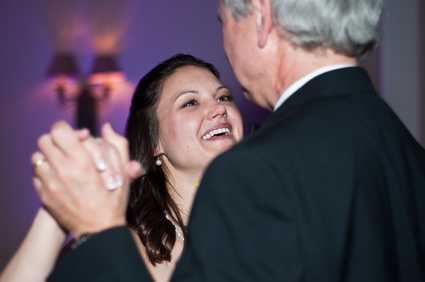 The dances between the bride and her father (father & daughter dance), and the groom and his mother (mother & son dance) are among the most poignant traditions at the reception.

The father & daughter dance represents their last dance together before the father gives away the princess he has raised to her new husband.

The same sentiment is attached to the mother/son dance.

Sometimes a song is chosen that speaks about the love the parent has held for the child, and some people like a song that talks about the child’s honour for the parent.

It works best if you have just these two slow dances after the first dance.

By the time they are over, most of your guests will be itching to party down!

But some couples choose to add one more dance, with the DJ inviting the members of the bridal party to take a spin on the floor, followed by the parents of the newlyweds, and then at the last inviting everyone else to join in.

Maybe you can ask your parents to choose this song.